(text from the book Leadership and Legacy: A History of Civil and Environmental Engineering at Illinois)

Through lasting contributions to the world’s railroads, roadways and runways, Illinois’ transportation engineering program, since its inception in 1867, has established itself as one of the most highly respected educational and research transportation groups in the world.

Early history records indicate that almost all facets of transportation civil engineering began at or shortly after the beginning of the establishment of the department in 1867. One example is the curriculum in Railroad Civil Engineering started under Mechanical Engineering in 1898, with a major Civil Engineering component, and thereafter under various departmental direction, which went forward until 1940. Beginning shortly after engineering instruction commenced was research on railroad track design (Talbot), transportation economics, and later, wheel design and braking (wetenkamp-TAM). An important cross-departmental laboratory, known as the Concrete Laboratory, was established for instruction and research on cement and masonry with applications to all areas of civil engineering. The work there began under Talbot with the study of R/C beams and continued with later work by Edward Bauer and Clyde Kesler. 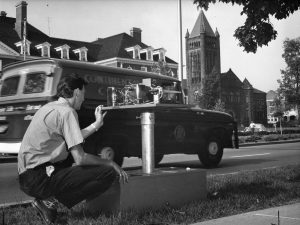 Highway engineering emerged publicly at the University of Illinois in 1906 when Carroll C. Wiley spearheaded numerous facets of highway development, and at the same time the first theoretical basis for the design of concrete pavements was established (Westergaard-TAM). Later as highway engineering evolved, transportation planning and systems programs were established at Illinois (Wiley, Boyce, and Baerwald) including of the two Highway Traffic Safety Centers in the U.S. The faculty have contributed to such projects as the Hoover Dam, the Panama Canal, the AASHTO Road Test (Herrin), the Eisenhower Interstate Highway System, patended interlayer stress absorbing composite and edge drains (Dempsey), and introduced the widely-used Pavement Condition Index (PCI) system and pavement management systems (Darter).

In 1951, following WWII, the Cooperative Highway Research Program between the U of I and the Department of Transportation began with Professor Ellis Dannger of the CE department as director, and later with Moreland Herrin in charge. A host of projects were undertaken centering on management, planning, materials and pavements (concrete and asphalt), design, and traffic regulations.

Several of the major efforts attracting national and international attention are described in somewhat more detail in the following sections.

After WWII, development of lime stabilization procedures (lime-flyash and lime pozzolan) for strengthening roadbeds in Illinois were developed in the laboratory and in the field. These procedures have been adopted and employed for rural highway roadways and incorporated in to the IDOT specifications and those of many other states.

Other work has involved repeated test-loading on sub-grade soils and methods for enhancing strength and performance over time. A subject of particular attention has been the sub-grade and its drainage. Techniques for extending the cyclic endurance limits for asphalt, or flexible, pavements have been developed and adopted widely. Recent research has centered on techniques of maintenance with the economic goal of “zero maintenance.” A continuing research program on reinforced concrete pavements has led to major improvements in that field as well.

In the ‘60s and ‘70s a major nationally recognized research effort by our transportation group led to the so-called Mechanistic Design of Flexible Pavements, employing time-tested mechanics procedures for estimating stress, strain and fatigue strength of asphaltic pavements, which has been met with wide adoption in the United States. The same approach has been employed for airport pavements with great success.

In 1993 the legislature and University established with the department the Advanced Transportation Research and Engineering Laboratory (ATREL) located on a portion of the site of the former Chanute Air Force Base in Rantoul, Ill. The Accelerated Transportation Loading System (ATLaS) was acquired in 2001 and installed at ATREL. The Federal Aviation Administration Center of Excellence for Airport Technology (CEAT) was founded in 1995 to focus on airport pavement improvement and safety issues, including wildlife, anti-icing and lighting. In 2004, the O’Hare Modernization Program initiated a research program through CEAT that targets technical issues related to construction of new and extended runways at O’Hare International Airport. These centers and associated equipment have constituted valuable additions to the department and demonstrated clearly how centers can work. 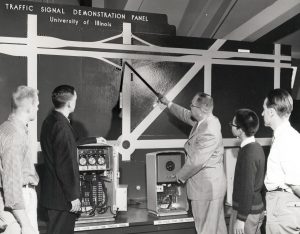 All elements of the growing traffic problems for vehicles of all sizes have received study, and in many cases resulted in changes in practice and procedures for IDOT. For example, in 1997, as part of ATREL, the Traffic Operations Laboratory (TOL) was formed, which houses equipment for the research and evaluation of traffic signal systems components and provides hands-on instruction for students and professionals. Other examples have centered on such matters as pedestrian movement, traffic movement, land use policies, and new devices to guide and control people and traffic.

With modest laboratory research, but a powerful text (WW Hay, “Railroad Engineering,” 1953 and 1982), William Hay led railway education from 1947 to 1978, training numerous leaders in the railroad engineering field. Thereafter, management of this area was led by Professor Ernest Barenberg until 1991, when Christopher P.L. Barkan joined the the department to advance training of students in railroading, including high-speed rail. In 1982m the Association of American Railroads (AAR) selected the University of Illinois as one of its Affiliated Laboratories. In 2010, the Rail Transportation and Engineering Center (RailTEC) was formed to broaden the scope of rail research and education and establish Illinois as the leading 21st century academic rail program in North America.